Note: Along this documents, the terms “sub-decoder” and “low level decoders” are both used and have the same meaning.

The process of having a sub-decoder interpret the logic signals and provide decoded packets for another high level decoder is referred to as “pre-decoding”. 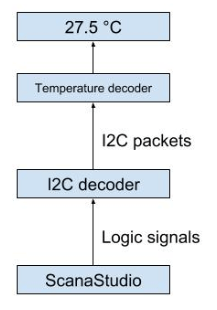 Any decoder can become a sub-decoder provided that it’s called by another decoder.

Let’s look at things from a programming perspective: a high-level script must ensure that when a low level scripts calls the function gui_get_value for a specific GUI ID, it gets a correct value. There are two ways to do that:

Of course, it’s also possible to mix those two solutions. For example, the SDA and SCL channels for an I2C decoder is a shared information between the high-level decoder and sub-decoder, so it would be wise to give the channel selector GUI elements the same ID chosen by the sub-decoder; this way they can share the same GUI element.

Next comes the most important part of the process, the pre-decoding: calling the sub-decoder and making use of the decoded data. This is simply done by calling the pre-decode() function as described below. This function will usually take some time to execute (depending on the quantity of logic signals to be analyzed). Then, it will return the newly decoded data packets. Those packets are called “decoder items” and are simply objects of the type dec_item_t as defined by this JavaScript constructor:

As you may have recognized, this data type simply encapsulates all the information that the script provides for ScanaStudio to draw the decoder items on the waveforms. Once you get hold of this array of dec_item_t, you can very quickly work on your high level decoding without worrying about the details of low level decoding. Another big advantage of this technique, is that your high-level decoder benefits from all the evolutions and bug corrections that are made over the time to the low level decoder. This has one downside though: you may need - from time to time - to adjust your high level decoder script if some modifications are made to the low level script that are not backward compatible with older versions.

Please note that a sub-decoder may only create decoder items. Any attempts from a sub decoder to add items to packet view or hex view will be silently ignored without generating errors or warnings.

Also when a sub-decoder adds content to a decoder item, only the first version of that content is taken into consideration, e.g.:

Description: This function calls the on_decode_signals(resume) function in the decoder dec_name

Return value: Returns an array of dec_item_t with the newly decoded packets.

Here is an example of implementation of the pre_decode function that shows how simple a script can get, provided that you use a sub-decoder to do all the complicated low level processing:

Description: This function returns true if the script’s on_decode_signals function is being called by another script, i.e. using the pre_decode function.

Implementing a sub-decoder in your decoder

In this section, we’re going to present a standard methodology that we recommend when one needs to build a decoder based on another (sub) decoder. The process we recommend can be split in several steps: