Architecture of a script

This chapter will give you a more exhaustive view of the base construction blocks of a script. It will address the different kind of interactions that can take place between your script and ScanaStudio software.

A script is composed of three main parts:

Any script must contain some meta-information, which is some text that describes what your script does, what’s its version or who is the author. Think of the Meta-information as the ID card of your script.

Both meta-information and entry point functions will be discussed in details in the following sections.

As you may have noticed, this is inspired from the way HTML or XML tags work. It’s highly recommended that each script implements this full list of meta-info tags. This will allow ScanaStudio to provide consistent and harmonized information to the user of your script.

Each and every script (that is to be supported by ScanaStudio) need entry point functions to operate. These are called by ScanaStudio when a specific function is to be carried by your script.

A summary of the entry point functions is listed in the following table:

Note: Each and every one of those functions will be discussed in details in dedicated sections of this document.

Not all of those entry point functions need to be implemented in your script. It all depends on what features you want your script to have. ScanaStudio will parse your script searching for those “special functions”, and will automatically detect which features are supported by your script.

You may notice the word “Script context” was mentioned in the table above. The Script context simply defines what your script is allowed to do when a particular entry point function is called. In other words, some of the functions exposed by the ScanaStudio object are only available for a particular context.

For instance, if the on_decode_signals function is called - in the Protocol decoder context - the ScanaStudio object will expose functions that allows fetching captured signals and creating decoded data elements (that appears on the waveform). Example of a function available in this context:

However, some functions in the ScanaStudio objects are available across all contexts (global context), like the functions used to display console messages:

As you may have noticed, the entry point function called to launch your script defines the context during the whole time the script is executed. Context can never be changed unless another entry function is called.

Usually, you don’t need to worry about entry points and their contexts: you should never need to use signal building functions when decoding signals, and vice-versa. If at some point you feel limited by the context of the script, that probably means that you’re doing something wrong and that it’s time to rethink the architecture of your script.

Along this document, all function available through ScanaStudio object are described and its context clearly stated.

Anatomy of a simple script

Before we get deeper into the exhaustive list of functions and methods used to build sophisticated scripts, let’s analyze a very simple script to get a global view of the architecture of a script and how different parts, work together. Let’s imagine we want to build a script that will calculate the frequency of signals, and display the frequency on the waveform as shown below.

Such a script would have two mandatory entry-point functions:

For that simple script, the GUI is very minimalistic, since there is only one option that needs to be set (or changed) by the user of the script, which is the channel which shall be analyzed by this decoder. 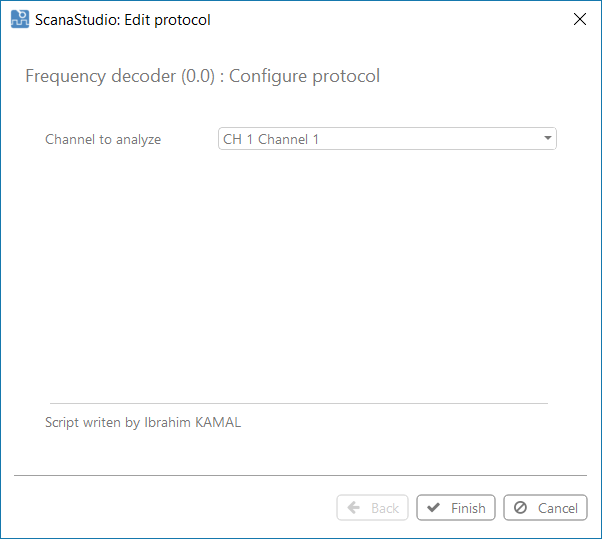 To create such a GUI, first, we have to create the on_draw_gui_decoder() function: the entry-point function which will be called by ScanaStudio when the GUI needs to be redrawn.

The function ScanaStudio.gui_add_ch_selector(...) simply tells ScanaStudio to add a GUI component called “ch_selector” (Channel selector). As the name implies, this adds a combo box with the list of channels supported by the device currently used. This function takes 3 parameters:

Note: The title of the GUI cannot be changed via the on_draw_gui_decoder() function. It is automatically generated from the meta-information provided by the script.

Another entry-point function needs to be implemented: the on_decode_signals(resume) function. This function is called each time ScanaStudio needs to decode logic signals using that script. In some situations, this function may be called repeatedly as new logic signals come in (in case of a logic analyzer that supports live data stream). The function argument “resume” is true if it’s a repeated function call for the same capture. At the very first call to that function, the resume parameter is false. All global variables retain their value between different calls with resume == true.

We’re not going to analyze this script in detail for the time being, but it’s worth noting that it’s fully functional.