Important Note: ScanaPLUS is a discontinued device and have been superseded by SP209 series logic analyzers. We - of course - continue to provide full support for the users who have purchased ScanaPLUS devices.

ScanaPLUS is a 9 channel logic analyzer with 100MHz sampling rate. ScanaPLUS compresses and stream samples to the host computer. 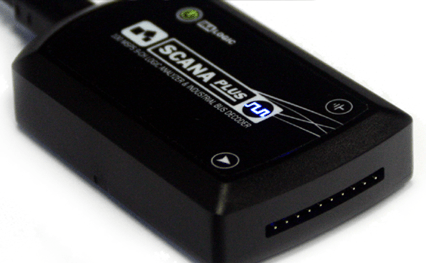 ScanaPLUS device mode of operation is illustrated in the image below: it samples the logic signals on all 9 channels at a maximum sampling frequency of 100 MHz, and records the exact time of each and every transition. In the same time, it compresses this data and streams it to a host computer running ScanaStudio. That implies that there is no need to adjust the sampling frequency and number of samples to reach a compromise between sampling time and accuracy: With ScanaPLUS you can use the maximum sampling frequency without sacrificing the memory usage.

ScanaPLUS device drivers are included and should be automatically installed with ScanaStudio software. Because certain system configurations may require manual installation, the following sections provide guide lines to perform driver install or update.

If the device is still not recognized at this point, we recommend installing the FTDI D2XX drivers that can be downloaded here: https://www.ftdichip.com/Drivers/D2XX.htm

ScanaPLUS devices uses an FTDI USB chip, loaded with a default FTDI PID/VID. A Proprietary PID was latter attributed to Ikalogic products: this prevents FTDI drivers from claiming the device as an FTDI serial COM port.

For older devices (like the ScanaPLUS), the loaded PID was not a proprietary one, and is shared with other FTDI Chip devices. Luckily, it is possible to update the PID of an older SQ device by launching the device compatibility wizard (which can be accessed from the top right settings menu in ScanaStudio software). 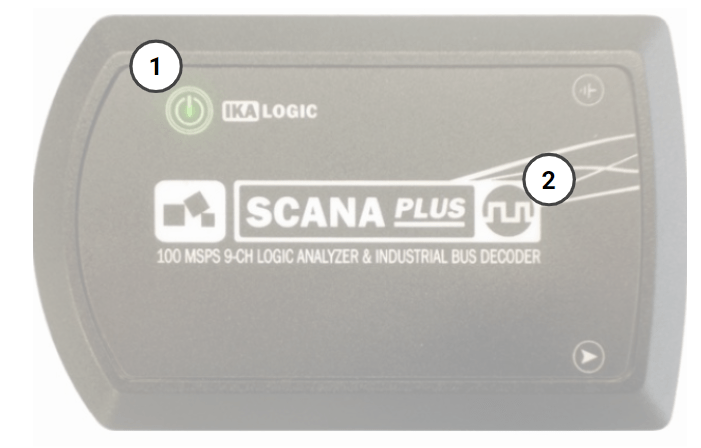 The Power LED (1) - as the name implies - is tuned on when the ScanaPLUS device is correctly connected to USB port and powered up.

The activity LED (2) blinks whenever there is a logic state change that is detected on any of the 9 input channels.