Visitors asking me why they should switch from Saleae to Ikalogic...!

Just like last year, this year also we’re participating in Sensor + Test trade show in Nuremberg, Germany. It’s always a pleasure to meet new persons in that field, specially persons who are passionate about electronics and all that gravitates around it, but more importantly, we find it heart warming to meet to meet happy customers who have bought one of our logic analyzers sometime in the past 10 years.

Now, if you have ever been to this fair before (Sensor + test), you may wonder why we’re present at such a fair where all exhibitors are coming from a purely industrial field. Indeed, almost all exhibitors are selling HVAC (Heating, ventilation and Air Conditioning) sensors, as well as other industry-specific sensors like pressure sensor or flow meters. Well, as a matter of fact, there is electronics everywhere, and electronics need development, debugging, and eventually maintenance.

It’s funny though to see how many engineers still don’t know how much a logic analyzer can make your life easier when debugging a system involving communication protocols.

I also got asked several times, how does the SP209 series compares with the equivalent Saleae products. I tried to be as unbiased as possible. I start by saying how much I respect Saleae as a company that have disrupted the market in a very positive way. Let’s compare Ikalogic SP209 (standard version) VS Saleae Logic 8:

I am not comparing the list of supported decoders, as both Ikalogic and Saleae support a fairly good amount of standard protocols.

Still on the hardware part: you may notice Ikalogic’s SP209 do not have analog inputs, but, the trigger IN/OUT lets you synchronize your logic analyzer with the best and most powerful bench-top oscilloscope you’ve got your hands on. This, in my opinion, is much more important.

Now to the software part. We share with Saleae the same philosophy about the importance of software. Both Ikaogic and Saleae offer a single software for the whole range of logic analyzers (which obviously makes it easier to maintain to software part). Ikalogic’s software solution is called ScanaStudio while Saleae’s is called Logic.

Here is a list of main aspects in which Ikalogic and Saleae software are different.

ScanaStudio offer “alternate views” which is a set of different ways to represent decoded signals. Decoded signals can either be display on top of the signals: 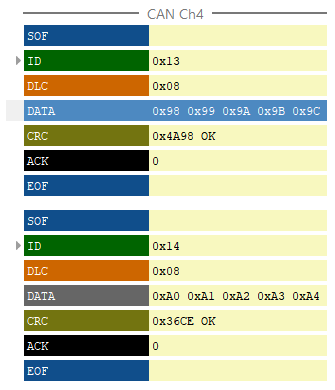 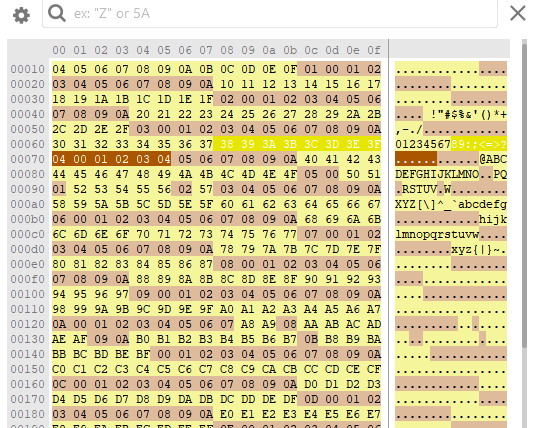 And the list is growing with every new software update. The idea here is to offer the user many different way to visualize the data, with each different view offering search and filter options.

ScanaStudio offers quite advanced protocol analysis options compared to Logic. For instance, signals can be displayed in many formats (Hex / Ascii, binary) and, depending on the protocol, you may display the address field in HEX and the data field in ASCII (or whatever configuration makes more sense to make data more readable).

Also, ScanaStudio allows a protocol to either import data from a file, or export data from a file. For example, you may need build a CSV table for all decoded signals and format it in a way that allows easy graph drawing; this is totally possible and can be automated.

This is one cool feature that can be very handy. Imagine you have a capture of some logic signals, and you wonder:

Well, ScanaStudio can let you modify a signal with a few mouse clicks (this is called the signal overlay feature) as shown in the animation below:

Okay, now we clearly have a different approach here. Saleae allows custom decoders to be added via an SDK (that implies having to actually compile C++ code). ScanaStudio, on the other hand, relies on (java) scripts (which implies that you don’t need to install any fancy compilers)

I can’t say which one is better, I leave this up to the reader’s judgement.

I’ll just add that ScanaStudio scripts are not only meant to be used to decode signals, but also add many add-ons to Scanastudio, like adding new trigger options or adding new signal builders (for devices that support signal generation).

Okay, to be fair, we are lagging on this part, as we currently offer no way of controlling the device and/or software from another application, but we are of course actively working on it!